Grandpa is a 24-year-old black and white Paint gelding.

He was a barrel horse. A FAST barrel horse. He had the love of his life, a young girl who rode him every day and took him to horse shows whenever they were held.

He had lived with other people before this girl found him, and had learned a very bad habit: cribbing. Cribbing is something horses do when anxious or bored. If a horse is left too long in a stall when he wants to run free, he will become anxious and learn to soothe himself by cribbing.

Essentially, the horse figures out how to suck air down into the stomach. This action produces a calming effect, something akin to taking anxiety medication. Most horses grasp the top of the stall door or a board with their teeth and pull against it, sucking down air. This wears down the teeth as well as makes stomach problems.

It is also very addictive.  Once a horse starts this behavior, they seldom quit. Grandpa had worn his teeth down to the gums before the little girl got him.

She let him run out in the pasture, so it wasn’t a problem for them. She named him Nickle, and they had fun for several years. But, as happens to many horses, the little girl grew up and no longer had time to ride him every day.

Her parents noticed that he was getting thinner and thinner, and was not eating. They called Melanie and asked for help.  They brought the horse to us, and yes, he was very thin. Our veterinarian said he was healthy, just not eating.

At the time we had a horse named Nick and a horse named Nickie here, so adding Nickle was just too confusing. We held a contest among the barn children to name him.  At the time, several of our students were also involved in the Tuscaloosa Children’s Theatre production of Charlie and the Chocolate Factory, and they all agreed to name him Grandpa Joe.

Much brushing, loving, and riding happened, and Grandpa began to thrive. He is one of our hardest working horses and loves every minute. He no longer cribs. 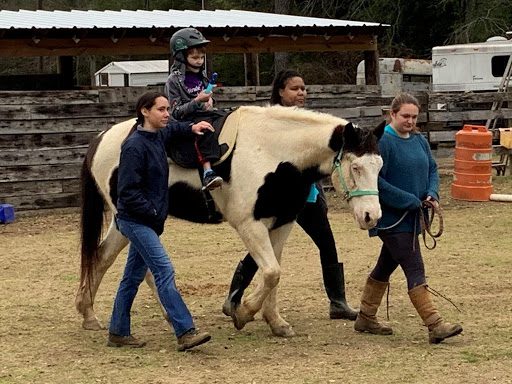